Yesterday me and Vasara were accompanied by Gabriella and Pogara and we rode on the fields. It was really nice to get to know Gabriella a bit more, she is really nice. It was Pogaras first time being ridden outside of the paddock, but with sweet Vasara in front it went really well.

When we got back to the stable we decided to ride a while in the paddock also, but no sooner had we opened the gate before the storm clouds rolled in and the sky opened up, with flashes of lightning and thunder that made the ground shake. So we fled inside again. 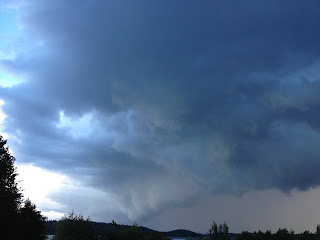