I haven't been blogging for a week since I've been feeling terrible, both physically and mentally.

I've worked too hard for two long, making me spending the past months shouting, crying, anguished and exhausted. And now it has gone too far, I'm at the absolute breaking point. My colleagues sent me home Tuesday at lunch, recognizing the seriousness of the situation after I broke down outside the office, after crying in a restaurant for an hour.

On top of this, Vasara is having issues with her back. We think it's due to the saddle, since I've really built up her muscles since I bought I two months ago, so it's time to change again.
Her spine has lifted at her loin, due to pressure from the saddle.
She got a two hour massage on Wednesday and got a few exercises to do with her every day, and of course she's not to be ridden but I'm walking with her an hour every day.
It's getting better, the spine was lower today and the heat was reduced; meaning less activity in the inflammation. 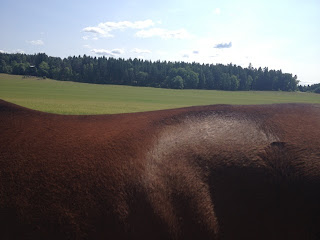