omg... well, I was going to compete with Elsa, and my trainers horse got sick so I had to go all alone. And it went fine during the trip down there with the trailer, but the second i stopped the car Elsa panicked in the trailer and that is a very violent thing for a horse so I was so afraid she was gonna badly hurt herself. So I had to quickly get her out, all alone. BUT one of the locks on the ramp had broken so I couldn't open the ramp!! and she was hysterical. So a man had to come help me and hit the lock open with a rock so we could open the ramp and take her outside. And this is 100% against the rules, as I have to show her passport with vaccination stamps before allowed to even open the trailer. So I walked her a bit to calm her down, then, as I was alone, I had to put her back in the trailer to go and show the passport. So I put her back on, then quickly left to get the passport thing done. And I couldn't find the right place, everyone kept telling me different places. And then after like 5 minute, they make a call in the speaker system that goes around the whole area "we have an emergency message. there is a horse in a trailer on the parking lot panicking in the trailer and have gotten stuck in the front pole. The owner needs to get there fast." So of course I knew it was Elsa. So I RAN back there, and found her stuck with her head underneath the front pole, meaning it's a big chance of breaking her neck if she pulls up hard, and she was once again hysterical. So I somehow, don't ask how, managed to get her head loose. And now she was even more panicked, so I just had to close all the doors and start driving her home. And I could hardly drive because the trailer was moving so much from her. And then, of course, we got stuck in a bridge opening.......... But finally we made it home (2 hour drive) and she was actually ok, only a bit stiff 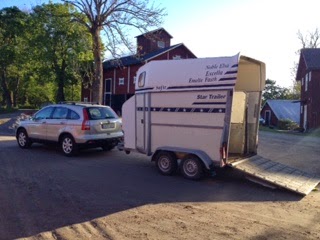