Last night I lost my caravan virginity, as it was my first night ever in a caravan. The only camping I've done before is sleeping in a tent at some very muddy and hazardously filthy field during music festivals, and Vanja has informed me that this is quite far from what we will experience during this trip haha. So to me, this is luxury. When hearing the word camping I just think of a field with lots of tents and potentially totally usable toilets, but I have hence learned that camping outside the festival area is more like an outdoor hotel and some even have pools and activities.

We woke up extremely early, maybe due to the light. This might also have been what kept us from sleeping well, combined with the first night at a new place. But this is what's nice about vacation, it doesn't matter if we are tired, we can sleep whenever.

We kicked of with a power walk 06:00 - 06:30, walking alongside the sea and enjoying the beautiful view. Then we had to head back and so some quick packing as we had to be at the ferry by 07:15.
There was some unclarity about how to reach the boat, but luckily the staff was more than used to this and skillfully guided us thorough it all. 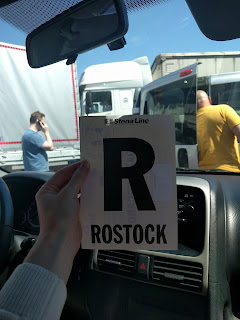 Onboard the ferry, we managed to do all our planning and markings on the map even before we left the dock, and then we sat down outside in the sun (me well covered in sun screen) and just relaxed.
Unfortunately, it turned out later on that I had been badly burned anyway, because I had missed to put sun screen on one knee, a bit of a thigh, and my scalp.... don't know how I'm supposed to cover that one, so tomorrow will be a hat day. 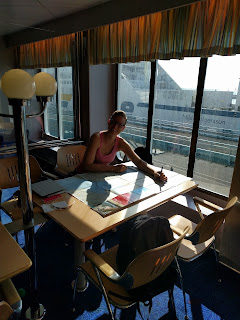 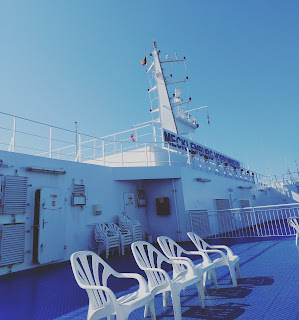 After too many hours in the sun, we headed into the on-board shop and bought some candy.

When we arrived in Rostock we started to drive south immediately. We followed the route that Google maps had suggested us and we decided on quite a while ago. This road will keep us away from both tolls and highways, which is perfect because we cannot go faster than 80 anyway, and we get to see the nice nature and small towns along the way. 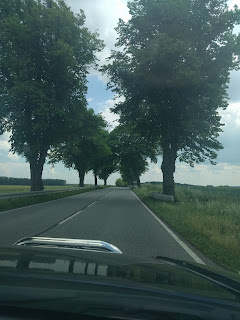 We stopped at a netto to buy some more fruit and lots of water, and after a total of approx 6 hours in the car we arrived at a camping called Olympiasee, located next to a small lake and with very few campers this early in the season. So we had a very calm and quiet night which was a nice change compared to the night before. The price wasn't bad either, we paid 16,50 Euro for the night and then we got both electricity and a shower each.

As we arrived so late, around 21, we didn't feel like cooking and instead ate water melon, eggs and sandwiches. 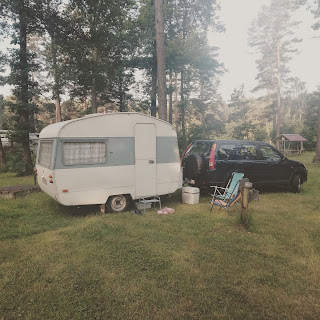