Finally a good night's sleep! We woke up at 7, and both had slept a lot better than the nights before. Probably we're getting used to the caravan.

True to tradition, we started with a walk. We had a look around the camping and the surrounding area and could quickly say that it was all breathtakingly beautiful. The mountains across the water laid covered in the early morning mist, the water was like a mirror and birds where chirping everywhere. 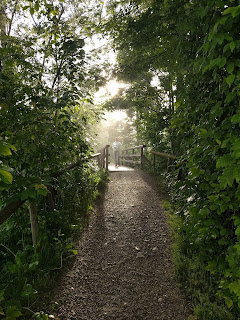 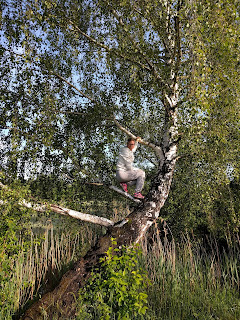 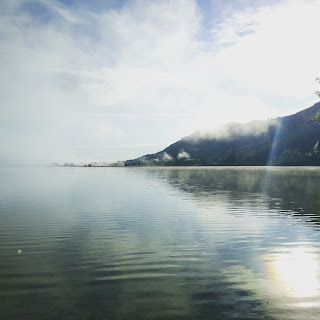 After our walk we had breakfast, hard bread with cheese and butter, and some fruits and veggies. Vanja tried out the cool camping burner and very successfully made porridge.

And so, we were on out way again, heading towards the alps and austria. It was not long until Vanja gasped (and I jumped thinking we were gonna hit something) and pointed out an amazing castle on a cliff in the mountains. And, oh my god, it was nothing but Neuschwanstein !!! My mom will go bananas that I've seen it. 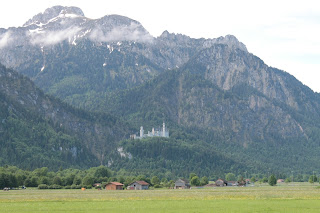 Then the alp-road began. It was a winding path, up up up and down down down and sharp turns. But above it all, it was too beautiful to fully be able to take it in. All the way through Austria and then Switzerland, mountains all around and beautiful small towns. We stopped halfway through to buy some groceries and to eat lunch at a bistro. Of course with a nice view ;). 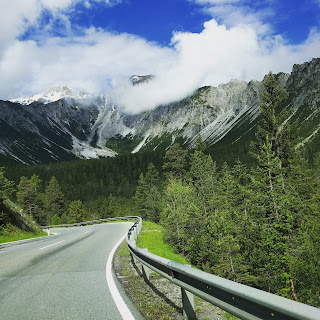 Entering the Italian border, we could hardly believe it was true; our first goal, lake Como, was so close! and suddenly, there it was. Glorious. Unfortunately by this time we had been in the car for 7 hours watching water and mountains, so it was a bit hard to fully comprehend how beautiful it was.

We drove along the west side of the lake until we reached Menaggio, and then headed west to Porlezza which is right next to lake Lugano. A fellow camper from this morning had given us a tip that there was a great camping there, so we decided to go there and use it as our base for the next few days, while exploring both Lugano and Como.

The evening was very calm and nice. We had dinner right by the water, which is where I sit writing this. I afterward, I will jump into my sweats and do some crosswords and reading and then have another good night's sleep. 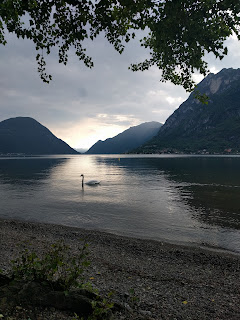