We started the day with a stroll through the camping, which turned out to be really cozy with several permanent residents and a nice little lake in the middle. There seemed to have been some glorious past to this camping, as we found a very large area which was fully connected with power but was now completely overtaken by nature. Even the roads where a complete jungle. There were also some sad looking recreation areas with broken volleyball nets. Our theory is that is was once a very big and popular camping, but then they built the autobahn close to it and hence no one drives on the little road next to the camping anymore. What we can say for sure though, is that we loved it!!! And we would definitely go back there. Cozy and small without lots of families to ruin the peace, nice price, nice people and good nature. What more can we ask? 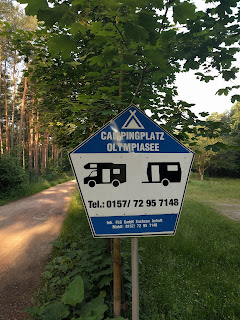 Then we took a 30 minute power walk to start of the day, like the day before, in the forest before we packed up and went on the road again.

The drive started out like the day before, with beautiful small roads with leafy surroundings. Then we could tell that we entered the more populated part of Germany and the road started going through bigger towns with bad roads and lots of stops, so we didn't enjoy it as much. So - we decided to get up on the autobahn and really kill a lot of distance. So we did. 650 kilometers with a caravan is good work! We only did a few stops to get some food (and kinder eggs!) And once we stopped by a stand selling strawberries, but it really did not feel like any trouble at all though we drove so many hours.

The scenery was changing and beautiful, the temperature was great, we laughed and played quizzes... the time flew by, and suddenly we had reached the goal for the day, a camping we spotted on the map right next to the Austrian border.

I almost died out of hunger at the end of the trip, so we had to stop at Pizza Bob in the small town Kissing. Apparently, in Germany most shops, restaurants, grocery stores and everything else is closed on Sundays, so pizza Bob was the only place open we found for hours. Thanks Bob for saving my but!